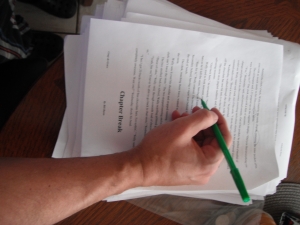 “Coup de Grace”, the title of my new novel (Spring 2015) is now in the beta reader phase. I’ve had a couple of good critical reads thus far. I’m collecting the suggestions and integrating them as I go. It’s been a little tough given how much life intrudes at times. However, we’re moving right along.

Here’s where the book is in the process: I wrote a crappy first draft. I got my first beta reader to look at it and I critiqued it half to death and rewrote the draft. I sent it to the publisher who accepted it for publication for Spring 2015 (Yeah, Bitingduck Press). They did a first read and sent me changes, which I’ve integrated. I went through the book again, and tightened and cut.

Now I’ve got a couple of beta-readers looking at it. I’ve got a couple of others lined up. They’re all helping me look for flat spots and terrible writing. Then, I’ll get a round of edits back from Bitingduck’s story editor. Once this is done, the story should be in pretty good shape, don’t you think?

Bill’s excited because his second YA novel, Kill Shot, is now available everywhere! Bill Bunn is the author of three books (soon to be four), several essays and articles. He published his first young adult novel, Duck Boy, in October 2012 (bitingduckpress.com). His second book is a collection of grown-up essays and articles titled Hymns of Home, released April 1, 2013 (bitingduckpress.com). In 2003, Moon Canoe, a children’s picture book was published. This book was bought and translated into French by Le Canotier, and released as Canoë Lune (2005). He is currently writing two pages a day to generate the rough draft of his next novel. Bill Bunn lives near Millarville, Alberta, Canada. He and his wife, Linda, take care of three teenagers, two dogs, two cats, and two hives of bees. Bill teaches English at Mount Royal University. https://www.facebook.com/billbunnauthor
View all posts by Bill Bunn →
This entry was posted in Uncategorized and tagged Beta-reading, bill bunn, bitingduck press, coup de grace, editing, ya novel. Bookmark the permalink.