Heading to California for some readings (and to hang with Bitingduck Press folk)!

Here’s some of the skinny! 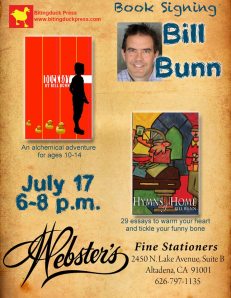 Bill’s excited because his second YA novel, Kill Shot, is now available everywhere! Bill Bunn is the author of three books (soon to be four), several essays and articles. He published his first young adult novel, Duck Boy, in October 2012 (bitingduckpress.com). His second book is a collection of grown-up essays and articles titled Hymns of Home, released April 1, 2013 (bitingduckpress.com). In 2003, Moon Canoe, a children’s picture book was published. This book was bought and translated into French by Le Canotier, and released as Canoë Lune (2005). He is currently writing two pages a day to generate the rough draft of his next novel. Bill Bunn lives near Millarville, Alberta, Canada. He and his wife, Linda, take care of three teenagers, two dogs, two cats, and two hives of bees. Bill teaches English at Mount Royal University. https://www.facebook.com/billbunnauthor
View all posts by Bill Bunn →
This entry was posted in Uncategorized. Bookmark the permalink.